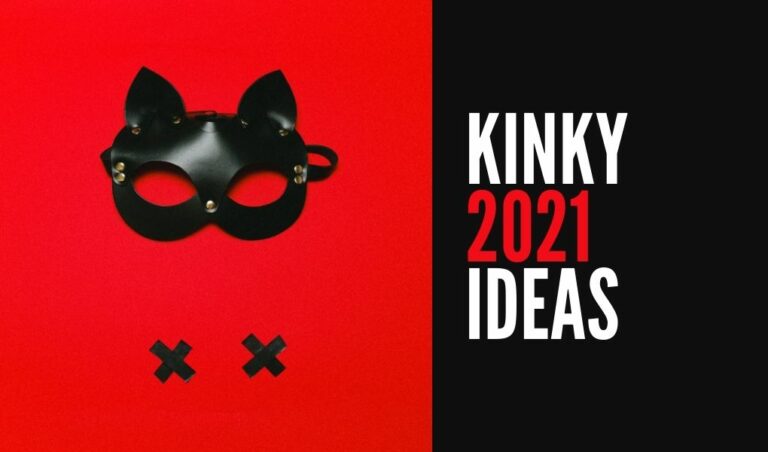 I don’t know about you, but coronavirus killed ALL my kinky plans for 2020. Not only that but I’ve left myself go with lockdown snacks a plenty. Not a good look. When the gyms re-open in December I’m going all out. No more chocolate Hobnobs for me… 🙁

To inspire you (and me) to look forward to the good times ahead, here’s some kinky adventures I’m looking forward to in 2021 (with any luck).

1. Heading back to Le Boudoir club

Le Boudoir, a London swingers club, had just opened a new venue as Covid struck. I’ve written about my exploits there before (here, here and here), and I was excited to see what the new venue was like.

So many questions I wanted to know the answer to.

My first experience at Le Boudoir was with a group of five kinky couples I’d met on Feeld (formerly known as 3inder before they were told to change their name by Tinder). My partner at the time and I had a date with another couple, a get to know you session, after which we were invited along to join the kinky gang (I have written a little more about that experience here).

That group has since disbanded, but I’m keen to replicate the evening, as it was one of the best I’ve had. Attending a sex club alone is great and all – I still get to be a voyeur and an exhibitionist – but I would rather play with people I know, or at least hang out with people I liked in the downtime between all the shagging.

I was just getting started re-creating my kinky social circle when the world went tits up.

Post lockdown it’s high on my priority list to re-assemble a few of my kinky friends, bring some newbies on board, and just generally have a laugh and evenings out with like minded folk that may or may not end up in group sex 😉

Next on the list is to hold a dinner party which involves kink in some way.

At first, I was wondering if I could book a room at a London private members club or restaurant and host something there. Unfortunately, I don’t think many venues’ terms and conditions would allow us to do what I want to do.

Plus, I don’t want random caterers snapping pics on their phones and having my dick pics leaked onto the internet.

So that leaves the option of hosting it myself.

It gives me the flexibility to plan the night just to my liking, but does limit the number of people who can attend. Maybe if the idea catches on we can hire a private castle or country estate and go full Eyes Wide Shut for a weekend.

UP NEXT:  Why Would a Woman Want to Be a Submissive?

But until then, my London flat it is.

Here are my thoughts on how the evening would run.

First up, it would be designed for dom sub couples. I like the idea of a CMNF (clothed male, naked female) theme. The doms would be smartly dressed, whilst the subs stripped on arrival.

Alternatively, everyone could be fully clothed, but after each course of the meal the subs must remove one item of clothing, until they were fully naked by desert.

That option may be a bit extreme for some folk. So the alternative is everyone remains clothed, and only my sub is dressed provocatively as she prepares and serves dinner (for the guests viewing pleasure, of course). Again, she could either start in her lingerie, taking one item off per hour, until full naked, or she could remain in her lingerie until later in the evening.

If going with the latter approach, after serving dinner my sub would be expected to sit by my side and attend to the guests.

Depending upon the group present, she may also be asked to kneel under the table, moving around the guests, spending ten minutes with each one as they ate. And yes, by spending time with them, I mean pleasuring them sexually with her mouth.

Yet more alternatives are:

After the dinner, everyone would be asked to strip down to their underwear, or get completely naked. We’d do some trust exercises or guided massages to get everyone in the mood.

Another possible post dinner activity could be ‘sub trials’. Each sub would be given a chance to show how well trained they were, or a special skill they have. For example, one dom sub pair might have service orientated commands and poses absolutely on point. Another may do the best strip tease. Sort of like a pageant contest except the winner is the best sub.

There are so many ways the evening could pan out or be arranged. I guess it depends on the type of dom sub couples I invite, how experienced they are, and the dynamics they have.

The dominant, exhibitionist, teacher side on me would love a group of couples who had never really done anything like this before, but were keen to get kinky and go wild. There’s something about the corruption or innocence, the wide eyed astonishment, fascination, and arousal when they reaslise this sort of shit goes on, that turns me on.

UP NEXT:  Le Boudoir Review: What's it Like Attending as a Submissive Woman?

Risky board games, dom sub demonstrations, then everyone getting naked and fucking would be perfect.

(Ps: If you’re a kinky London professional couple aged 20-45 and the above sounds interesting to you, drop me a line)

3. Getting naked in public

The warm water and bubbles running over my body. The relaxing music. The smell of incense.  What could be better?

Us Brits are prudes. If you whipped out your dangly bits in an English spa resort you’d be frogmarched out of the place quicker than the onlookers could finish their afternoon tea.

But I’ll let you in on a little secret. Nestled away on the outskirts of Amsterdam is a spa where nakedness is not only encouraged but enforced.

Whilst the spa isn’t designed to be sexual (unlike somewhere such as the infamous Rio’s in Kentish Town), and I’ll no doubt be shouted down by the naturists who proclaim being naked is natural and entirely non-sexual, for someone who’s an exhibitionist and isn’t often naked in public, there is definitely a bit of a thrill to it.

If you go with a partner and you get to see them sunbathing naked, I dunno, how can you not get turned on by that…?

(As an aside, the funniest moment I’ve witnessed there was when a couple of young lads’ excitement at the prospect of a dip in the pool quickly turned to horror when they realised swimming trunks weren’t permitted and they would have to get naked in front of each other.

The way they found out was equally gratifying. A gentlemen on his way out spotted the pair wearing shorts and informed them of the situation. They thought he was joking until he brushed the towel around his waist to one side, exposing himself to them to prove he was telling the truth.

Those poor young lads made a quick about turn and hurried to the exit pretty sharpish, I can tell you!)

I had been planning to take a small group of friends over to the Amsterdam spa for a weekend getaway in February this year, but in the end I only went with my sub. It was still lots of fun, but I can’t help but feel a larger group, with the prospect of group sex in the evenings post spa would be next level.

But that’s enough about me. What kinky exploits are YOU looking forward to when we are allowed to meet each other again?

I enjoyed reading this. The dinner party idea sounds great. Good luck with that.

Thanks, SirPaul! I am looking forward to it very much…

Dinner party sounds perfect. Maybe all subs in revealing lingerie and high heels? Then taking it off for after dinner cocktails and naughtiness?
Love the idea of ten mins with each guest and watching each guest feel waves of pleasure, maybe adding the element of no one knows who will be next? Sign me up please x

I love your thinking, Victoria ;). The random element is fun. She could have all our names in a hat under the table with her and pull out each one by one. You wouldn’t know if it was your turn until you felt her hands running up your thighs…

Talking the Ten Minutes in Heaven game to the next level.